HYBRID NAVIGATION SYSTEM INSIDE THE BUILDINGS 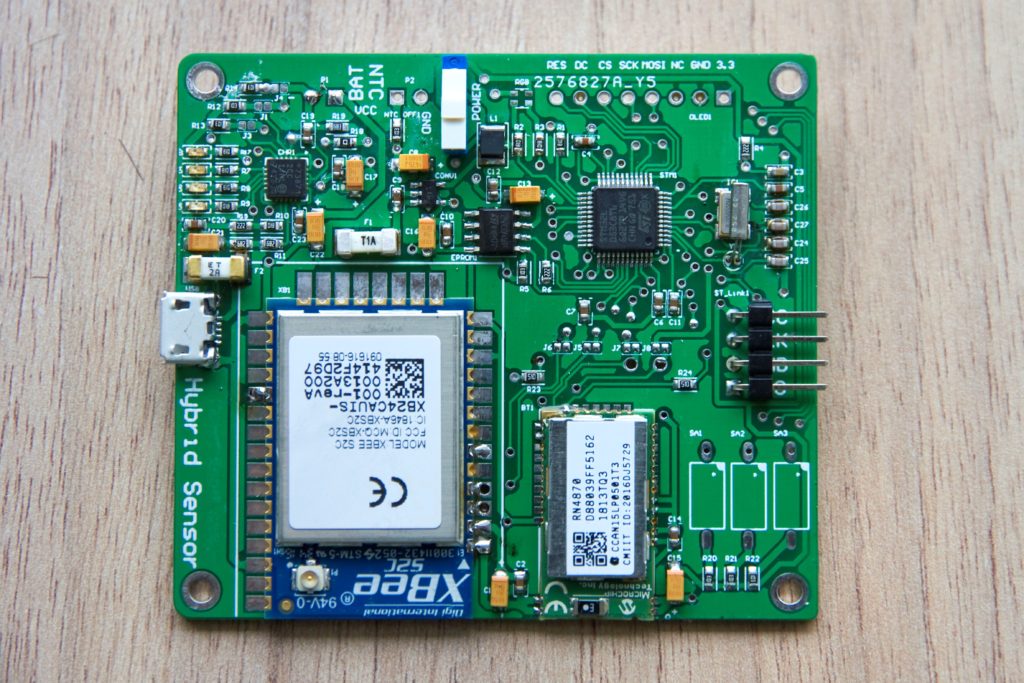 The hybrid navigation system is a wireless network consisting of a predetermined number of radio measuring probes and accompanying supervisory devices. It combines the features of three radio technologies: Bluetooth, Wi-Fi and XBee (IEEE 802.15.4 protocol). The system operates in the ISM (Industrial, Scientific, Medical) 2.4 GHz radio band, which is suitable for the detection of living creatures in closed rooms due to the high percentage of water content in organisms. To a lesser extent, the system can also be used to detect inanimate objects depending on the material they are made of. This is due to the nature of the electromagnetic wave and its tendency to be reflected and absorbed depending on the type of matter it encounters. The main task of the system is to provide all users within the range of the system with the data necessary to determine their location in relation to the monitored facility. If the user enters the room, the system can additionally increase its tracking accuracy using radio tomography, the algorithms of which have been implemented in electronic systems.

The structure of the navigation system does not maintain permanent network connections between devices, and its operation is based on Bluetooth technology and the Beacon standard. In practice, this means that the hybrid radio probe is able to act independently and engage in various tracking processes without the need to cooperate with other system components.

The presented system consists of a set of sixteen hybrid measurement probes, an acquisition and supervisory device, an MQTT broker and a computing unit performing reconstruction for the needs of radio tomography, the dependencies of which are presented in Figure 1.

Fig. 1. The structure of the hybrid navigation system inside buildings with a resolution of 16×16 (measurement sequence for probe number 1)

System measurements are sequential. This means that the probes perform operations under the strict control of the central control unit, one after the other, so that if the fluctuation level of the adjacent electromagnetic fields increases, transmission can be repeated and measurement errors reduced. The central control unit is also responsible for preformatting the measurement matrix and adapting the data (transformation into the JSON standard) for transmission towards the MQTT server and then to the data carrier in any selected computing platform.

The basic element of the building’s navigation and tomographic network is the hybrid measurement probe presented in Figure 2.

The structure consists of several specialized sections. The first one, visible in the upper left corner of the board, is the +3.3 V power supply equipped with the MCP73871 lithium-polymer battery charge controller, as well as the possibility of connecting an external +5 V power source via a micro USB connector (visible on the right side of the device). A double-sided laminate was used for the production of the plate, but the reverse area of the plate is occupied only by the grommets and the mounting surface for LiPo batteries with a capacity of 1000 mAh.

The area in the upper right corner of the board is occupied by the control and control section, the main element of which is the STM32L053C8T6 microcontroller. Its task is to issue commands to all other components of the device, as well as to collect and process measurement data The use of an ARM microcontroller with the Cortex-M0 + core allowed to create a system with a very low energy demand, which has a direct impact on the battery operation cycle. On the right side of the device, there is a ST-LINK / V2 programmer connector, which can simultaneously fulfill an alternative route supplying power to the board.

The entire lower part of the board is dedicated to the radio section. In order to protect the devices against interference, the ground layer was completely selected from there, and the fields created for this purpose were used to install communication modules such as Bluetooth RN4780 with an integrated ceramic antenna or XBee S2C with an external directional antenna connected to the U.FL socket. With the advent of Bluetooth 4.2 technology (present in the device), it has also become possible to use the TCP / IP communication protocol.

The whole thing was connected with each other by means of UART serial ports in a full-duplex configuration.

The Raspberry Pi Zero W single-chip computer with Wi-Fi and Bluetooth communication was used as an element supervising the operation of the hybrid probe system. Thanks to the installation of a special overlay, the service has also been extended by the XBee communication standard. The view of the internal structure of the control unit is shown in Figure 3. One of the Linux distributions based on the Debian project, ie Raspbian Stretch, was used as the operating system. Python version 2.7 was used to create the control software.

An office building was used as the research object of the navigation system, and one of its rooms as a test area for a radio tomograph. Hybrid probes have been located at characteristic points of the storeys throughout their area. Figure 4 shows the method of wall mounting of some of the hybrid probes in the reconstruction room. Due to the irregularities occurring in the body of the room, the devices were placed on special rotating hooks, which allowed for making corrections in the angles of electromagnetic wave distribution of directional antennas used in the project.

On the pedestals of the room along the entire perimeter, a very low voltage installation (+5 V) was carried out, divided into two sections with power supplies with a current capacity of 4 A each. This allowed for no need to disassemble the system in order to charge the battery.

Figure 5 shows the final version of the building navigation system. All device presence points are marked on it. The room marked “Floor 1 – Office 4” is a room under the operation of the hybrid tomograph, and its reconstruction results together with the heat map are shown in Figure 6.

Fig. 5. Fragment of a navigation application presenting one of the floors of the test building together with the mounting points for hybrid probes

Fig. 6. Reconstruction of the room and its registered presence with a heat map

Research on the system has shown that commercial radio technologies such as Bluetooth, Wi-Fi or XBee are used in integrated navigation systems inside buildings and present the potential to expand this type of structure in the future. The effectiveness of the system increased as the weaknesses of individual technologies were eliminated with the advantages of the others. Thanks to the appropriate calibration of the transmitters and placing them on the appropriate one, it was possible at some moments to determine the circumference in the waist of an individual breaching the examined area with an accuracy of a few cm.